A champion in the making!

“People may influence your destiny, but you are the only person who can determine that destiny” Wilsenx.

Everybody is a champion no matter how big or small initiatives and contribution you make in the family and the society at large. The problem comes when you don’t act or even recognize that you are a role model to many and believe that you can do it. You create that bridge that shall help many cross to the land of success and opportunities. Remember whatever steps you take, inspires and motivate others and I would urge youths to take actions to determine their destiny.

I would like to share with you one of the candid stories by Mr. Samson Ongondo, my ex-student 2010 December class at Nairobits. Mr. Samson really inspired me for that action he took towards an opportunity I shared in the class. He is really a champion and the best is waiting for him if he continues with the same zeal, patience, humbleness and understanding.

Some time people don’t believe stories shared with them but here at Wilsenx initiative we strive to share true stories from youths who are planning for success. If I tell you I played football with Mr. Dennis Oliech, French based and harambee stars player would you believe it?

To date I don’t regret anything because I wasn’t able to achieve in football like my friends who are based abroad but I have worked round the clock to place myself in the lands of opportunities, despite the challenges and obstacles on the way, I’m really happy with what I’m doing so far and the skies are stepping stones to my success. 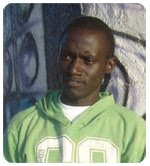 “My name is Samson Ongondo, an alumnus of Nairobits School of digital design.
Growing up in the slums I never imagined I would one day do what I’m doing now, immediately after finishing high school I joined Maji Mazuri youth group and I have been an active drama member since I joined the institution. At Maji Mazuri I got to know about Nairobits and its program which I was really eager to join”.

“Being at Nairobits was an eye opener! I realized that there were so many opportunities out there and with the right attitude you will succeed. After successfully graduating with a diploma in web design and development from Nairobits, I landed yet another opportunity to do video production and editing at Medeva TV (Media Development in Africa) which I’m currently undertaking video shooting and editing lessons”.

“I’m hopefully that the two trainings will go a long way in helping change my society positively by disseminating the same knowledge to other peers both directly and indirectly.

“You can follow my link to view some my works at coroflot www.coroflot.com/samm
Thank so much Nairobits for giving me this chance”.

I asked Mr. Samson the following questions just to know more about him and how he is planning to use his youthful energy to place himself in the land of many opportunities;

1. Where do you see yourself in the next 5yrs?

“My dream is to make a big and better impact in my world, Five years from now I would like to operate an advertising firm, be self employed or employed in a reputable creative institution.”

“People inspire me just as much as nature. I’m inspired by my family and all the love they’ve afforded me. I’m inspired by people who struggle through starvation daily and still make it out in life. Great designers and generally people in creative work inspire me too”.

3. What can you say of Wilsenx initiative?

“In my opinion Wilsenx initiative is a timely initiative especially to majority of youths in Kenya who would be seeking opportunities and knowledge, or just for inspiration and for this I am a beneficiary having been linked to Medeva training. I sincerely thank you Masaka”.

4. Your advice to the youths?

“Well my advice to youths, you can do anything when you set your Mind and with the right attitude nothing is too difficult. It also helps to have mentors in life.”

5. What did you do to reach where you are now?

“First and foremost I thank God for everything that I have been able to achieve. Over the years I have learnt to make use of the opportunities that come my way and I have learnt to take criticism in a positive way, so as to commitment that goes along way, whereby I always ask myself what makes me wake up every morning? And the answer is the self-drive and the urge to succeed.”

Mr. Samson you’re most welcome and I guess I’m that one to pat your shoulder for acting on the information that I shared with 42 students at the time of training. You are a champion and I would urge you to continue with that spirit. I take this opportunity to recommend Mr. Samson to any employers who are looking for talent, determined and self driven youths in the field of ICT. I believe given the support Mr. Samson will be one of the great employer / employee in the ICT field in future I see lots of potential in him.


”I have learnt that in this life you can get what you want often, you only get what you need. However, either way you still have to work hard for both" By Tobias Ouma

Watch the space for more champions…
Posted by Wilsenx at 6:51 PM No comments: Links to this post

The road from dream to reality.

What is Wilsenx foundation? This is a youth led initiative which at the moment is at infant stages but given the support required I/we would love to get more youth involved in the operation of the yet to be institution in the near future.

It’s not bad to dream and see things to reality. Every successful project requires time and dedication. Don’t wait for things to happen, make them happen. At the moment we have nothing but the only thing we have is energy, concept, dedication and passion in seeing things to reality. It is a bumpy road ahead with lots of challenges, dark clouds but this doesn’t block us from volunteering and helping youths realize their full potential in finding the champion in themselves.

Currently I have been helping the youth in my community to have a strong establishments of youth football clubs and after initiating Metro Sports some years back with my colleagues, I felt it was time for others to take lead by offering my coaching post to someone else. There has been a lot of challenges in the community for example lack of playing kits, playing space, other commitments and lack incentive for the players just to mention a few. I still love football and it's within ‘my blood stream’ and I still support Metro sport and so far we have achieved a lot as a team.

One surprising evening last year a group of youth approached and requested me to coach their newly formed team, I was somehow hesitant because I didn’t know if they were going to be fully committed in the team and play without pay. I can say the players are my champions, during the December 2010 holiday we have worked together playing ten friendly matches with local community clubs and one premier league team. At the moment two of our players are on trials with a premier league side and we wish them all the best. Sometimes you don’t know how influential you are to your community until someone spots that champion in you.

One of the initiative launched end of 2010 by Wilsenx is the football club Mathare North Rangers F.C whose mission is to engage youth in sports and to make them champions in life using football as an agent for change. We have successfully registered 30 members in our team and any support would be highly appreciated towards making Wilsenx foundation a reality. I take this opportunity to thank Mathare United FC team manager Mr. Fredrick Naduli (Razor) for donating a ball to our team. 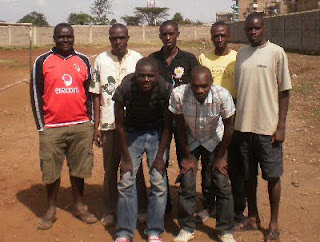 Vision: Our vision is to empower the youths to be critical thinkers and change makers in our society through networking, sports, education and skills transfer from one generation to the other.

Philosophy : Everybody is a winner; we have something unique that we can do. We believe in sharing, creating, educating, motivating and inspiring champions in our society.

Some of the activities are;
Currently we are trying to find well wishers and sponsors who can help us translate our ideas into reality. A lot is required to make the initiative up and running, Apart from donations we are looking for members who have time and are dedicated in the process.

"You should have the positivity in you and believe you are a champion to succeed". Wilsenx 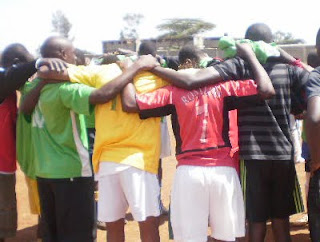 The team spirit! Let us pray... 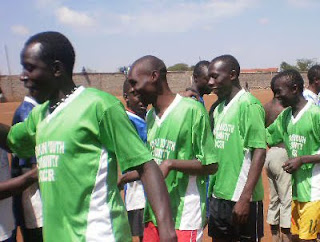 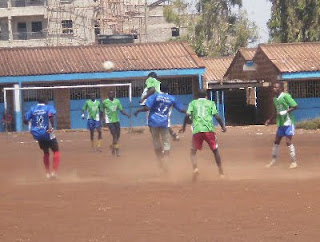 On the move.. Metro sports vs Rangers. 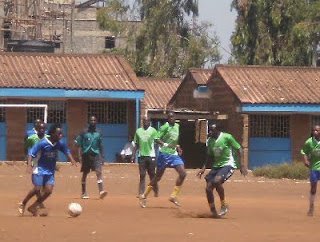 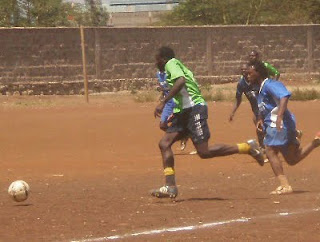 For help, full information and donation write to; wilson.masaka@gmail.com
Posted by Wilsenx at 10:52 PM No comments: Links to this post