Like the ocean, lakes and rivers in this beautiful nation called Kenya, we need to spread the spirit of love (Love Waves) and encourage peaceful cohesion of it’s citizens and visitors through our work, events, deeds, thoughts, speech etc. Anyone can start the waves no matter who you are in the society. It's not meant for any particular group or people, we are all actors even if in a small territory and we don’t need to wait any longer to start the positive waves across our nation; upholding the the three important pillars which are Peace, Love & Unity. Have you heard of the Mexican wave in sports which is now a culture in Kenya during sports events? In brief, there are many theories surrounding where it exactly started, some people say it is during the World cup in Mexico in 1986 and other say it was started during the Olympics or by an individual ; but look at its impact internationally across the different cultures and creed. It is incredible! For more about the Mexican wave in sports kindly read http://www.guardian.co.uk/notesandqueries/query/0,5753,-21439,00.html

I’m filled with a lot of hope when all our leaders come together for the sake of this great nation like during the hero’s day ( Mashujaa day) celebration every 20th of October . Thus, this shouldn’t be the only platform for them to come together but, an everlasting practice even during different avenues of political affiliations or ideologies. Recently, I was at the Nyayo national stadium watching our national team play against the South African national team ( Harambees Stars v/s. Bafana Bafana) and to my amusement I felt once again as a true Kenyan whereby being part of the big spectators or fans who streamed in the stadiums with all regalia and paraphernalia bearing our national colors. Don’t underestimate the importance / power of a nation’s flag and its colors; it does Unite, Inspires, Identify, Rejuvenates etc. Even though our team lost 2-1 during the international friendly match, I was really happy to see my fellow Kenyans turnout in large numbers chanting songs of praise to our national team and the nation at large.

It is my sincere wish and hope that this should be consolidated in all events and gathering whether political or non-political...

In every inspiring moment I leave a mark or trace and that is why I channel my energies and creativity by running a T-shirt campaign in different series. I hereby would like to introduce to you the Wave of Love – United Kenya which is inspired by the Kenyan citizens coming together for the love of this great nation either in sports events, public event etc. It's time for everyone to share and spread the love and start this wave most especially during this election time. "A positive wave starts with one person and that person can be you…" Wilsen Initiative 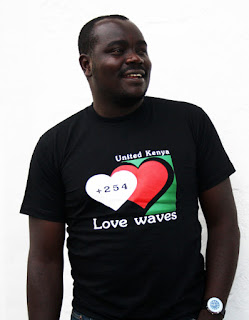 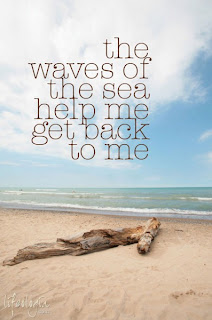 The waves of the sea

"The waves of the sea help me get back to me".
Source :  http://morethansayings.blogspot.com/2012/08/the-waves-of-sea.html
Here is a competition for you to try it out...

What is your expression of love?  Send your originally designed / crafted idea to info[at]wilsenx.com to stand a chance of winning United Kenya T-shirt. The T-shirt is out on sale but we shall award one top idea. Please don't send computer illustration... Think and Develop!

Note: The winner shall arrange for collection or shipment of the t-shirt! 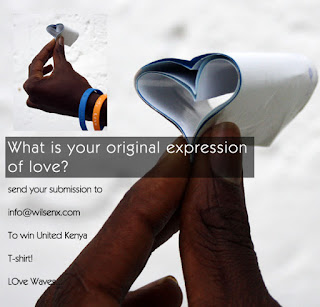 Posted by Wilsenx at 5:10 PM No comments: Links to this post

Increase Your Net Worth As a Young Person.

After my trip from Germany I have been pondering and asking why do we young people find ourselves on the failing trail? I came to realize that most of the young people never take stock of what they want and  what they  have done in life.  Most of the time young people move with the flow for example  in choosing a career path, dressing code, how they spend leisure time, friendships etc. Some of the reasons why young people fail are for example, and not limited to below;
If there’s something we can’t place a price tag on, is the human kind we were created in God’s image and we can’t be compared with anything  and we are  installed  by the almighty Father as the supreme being on earth. My definition of worth here is determined by what you can do or have done to get other opportunities. Failing once in life doesn’t mean you will fail forever and even if you got an E- grade  in your O’level doesn’t mean the ‘END’  to life, though it is a wake up call to try again and do more about searching for  something that you can do better for  example by exploring other avenues like business, sports,  talent usage, technical skills, art and design etc. Some of us are blessed with either business, creative, leadership acumen that we ought to utilize them to increase our worth in the society.

Recently I came to  notice there people who have reached a point they never submit their CV’s  / resumes in search for a job because their development track records speaks for itself and is evident when you mention their names and they are at another level of ball game thus their net worth is super!  In this case instead of looking for work, the work awaits for them or are created to fit them in any system. I will spare mentioning names for this time round but open your eyes wide and look around your society and you will have many answers.

My advice to young people in terms of increasing or boosting their Net Worth are;
This is all for this month till next month,  and if you have an article you would like posted on our platform kindly don’t hesitate to share with us and the rest of the audience.