The year is coming to an end and I’m  looking forward to ushering in the new year 2013, a lot is expected in the new year being the year our Nation shall be celebrating its 50th birthday, the year of  jubilee.  Never the less it is good  to take account of the year 2012 which has had its share of  tribulations and triumph, thus with insightful reflection it will help us if possible not to repeat the same mistakes hence fasten our seat belts and cast our net wider for greater opportunities in 2013.

God has been so great to me this year like many other years in my life, I’m thankful for the support given to me all around the clock that granted me the opportunity to travel to Germany and the latest being Arua in  Northern Uganda.  As one of many Kenya who embrace diversity and wants peace to prevail in our country I have always challenged myself and my friends to initiate activities that shall unite all Kenyans even with less resources.

After launching the tribes42 T-shirt campaign One Nation – One People: My tribe is Kenya… (http://wilsenx.blogspot.com/2011/08/what-is-your-contribution.html) I feel more encouraged  to engage the youth in other activities that could help them spend  their time in a meaningful way especially in December.  December being a festive season and  almost all the schools , colleges and universities are closed at this time, and looking at the local sporting scene some of the leagues has ended,  thus leaving many of us glued to our televisions watching overseas leagues, movies etc. This trends leaves many young people wandering  around in the community in search of how they can use their time effectively or even try new experiences which some might be misleading.

“Amani  Mtaani” means peace in the community,  and with keen observation on how we usually spend our festive season in December  I have organized  a football tournament dubbed “Amani Mtaani”  whereby ten teams compete in a league basis play off and finals to be payed on the 26th December 2012. The main objective of this tournament is to preach peace and have the youth play together and forge new friendships despite their tribes and political affiliation. The most important rule of the tournament is to shake hands before and after each much and we strongly recommend praying together after the match despite the results.
My plea to everyone especially the youth!

“ You don’t know the importance of PEACE until you lose it… Don’t let the evil spirits torment your mind at the expense of losing peace… Let us cherish peace and live to maintain it forever. Happy festive season! @Wilsenx

“There’s nothing like broken dreams… Keep on dreaming whilst you search for your success in the puzzle”. @Wilsenx 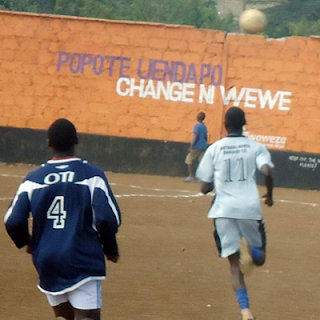 
Posted by Wilsenx at 5:46 PM No comments: Links to this post