Happy birthday GoDown Art centre!  It’s now ten years since inception and indeed you are a testimony to be emulated: if you want to run fast you will run alone, while if you want to go far you need to work with others.  You have indeed gone far and wide in shaping the art industry by providing the much needed platform for artists to learn, share and co-create while finding lasting synergies.

I was honored to be part of the celebrations which were well organized from day one. I was able to connect with like-minded creative’s from different genres of art such as digital artists, sculptures, painters, curators, script writers, choreographer just mention but a few. I also learned a lot from the moderators and the panelist who shared their vast knowledge in ICT, policies development, economics etc. 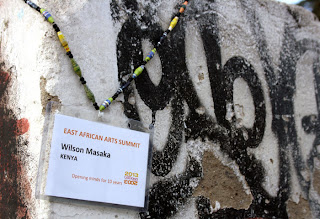 My ten take-away during the summit are as follows:

I thank The GoDown for having achieved a great milestone, and I look forward to the next summit and wish you all the best in the next ten years road map.
Posted by Wilsenx at 5:49 PM No comments: Links to this post

Mathare North Rangers F.c is one of the best teams in the slums of Mathare North. Since inception it has attracted youths who are interested in footballing activities whereby exposing their talents to the public while creating opportunities / platform for other young upcoming footballers.

The team is one of the 'vehicles' that Wilsen Initiative (Wi) uses to foster understanding and create lasting relationships amongst the youth and their community. Some of the skills the footballers acquire directly or indirectly are; leadership, teamwork, sportsmanship, decision making amongst others.

At the moment Mathare North Rangers F.C has a total of thirty players who have been selected from a competitive process whereby they express passion in football as an agent of change. Their big dreams is playing in the Kenyan Premier League and oversees leagues which we believe is achievable through discipline and hard work.

We actively participate in the MYSA (Mathare Youth Sports Association) zonal league with the vision of playing in tournaments and other competitive leagues. Our visions is hindered by lack of resources to run the club more professionally,  but we are determined to give the youths a professional alternative to play and express their talents which is non-existing in many slums in Kenya due to mismanagement, lack of resources and other downfalls.

Our clubs values are;

I was honored to be part of the team at Musoma Information Center based in Eastern edge of Lake Victoria in Mara region in Tanzania. Since I visited the place in 2011, there has been tremendous improvement on how the trainers conducts training and connects with the students in both outdoors and class activities.

Coaching is one of the core activities Nairobits uses in connecting senior trainers from Nairobi, Kenya to train and share their experiences with other subsidiary projects in Tanzania and Uganda.


Purpose of the visit!

My visit was purposed to train both the students and trainers in more advanced skills in web / graphic design and related technologies.

We divided the training into two segments as follows;-

Students Segment;
Trainers Segment (TOT)
Training Methodology
Embracing our teaching philosophy of learning by doing we were able to achieve the following;

Posted by Wilsenx at 1:55 PM No comments: Links to this post

Kenyan Football as a Glass of Water Mixed With Oil

The Kenya Premier League (KPL) has come to an end. We witnessed the pomp and color of the green army way before the end of the scheduled league matches. I take this opportunity to thank Gor Mahia fans, followers, players and managements for winning the trophy after eighteen years of hard work and determination despite the challenges witnessed on and off the pitch.

The question to ask is Kenyan football growing or it’s on the brink of stagnation? Are we moving forward or back-tracking with our airwaves still dominated by the Barclays premier league? Leave alone our social lives, on the street you’ll hear the deep loyalty given to the foreign clubs which is also goes to branding our businesses, vehicles, houses etc. Does anyone think of developing the grassroots football? Where is the competition witnessed back in the years 1997 -2002 during the Millennium tournament, Coca-cola tournament, Koth Biro tournament just to mention but a few. Those were days when football was felt in the grassroots’ with teams like Swapo (Huruma), Otto-benecker (Mathare North), Sakayonsa ( Pumwani) among others were the home of talents for the great game we love.

So what did happen? I know of some of my friends who left football and are now languishing in misery and some are successfully playing in the Kenyan Premier League (KPL) and in the foreign leagues. I’m sorry to say Kenyan football and that of most African countries are still at the position of defining their niche in football as an economical and social pillar especially in supporting the young people who make the larger population percentage of our nations. This is an example of a glass of water mixed with oil, which when left to settle does not result in an equal mixture. This analogy illustrates a situation where the grassroots’ football in Kenya as been left to die slowly at the expense of the flourishing premier league.

The situation is even worse for women footballers as their future continues to darken. You will only hear about them when there is a regional tournament because many opportunities pop up, not for the poor hard working ladies but for individuals who are eager to make quick gains at the expense of the sport and the ladies. http://www.wilsenx.blogspot.com/2013/04/the-voice-of-voiceless-in-kenyan.html

In the Kenyan situation the oil floats on the top (the top layer) meaning there are tremendous efforts and achievements if you focus on the top leagues (KPL and national wide league) and the national team (Men’s senior team). The water is the grassroots football and all other lower divisional leagues which are in a wanting situation where teams complete to get to the next stages with nothing to reward the champions or even reimburse the costly expenses of attending different matches.

I was once an active footballer and currently I’m running a community club called Mathare North Rangers F.C under umbrella of the Wilsen Initiative which is a youth led initiative that urges the young people to use their talents and skills to inspire positive change despite the challenges faced. Our football team is not registered in any league owing to the current situation and without adequate funding we can only do so much. The best part is that we won’t give up and we shall try to improve the situation for the next generations to come and the is the spirit at Wilsen Initiative (Wi). Our key mandate is to use football as vehicle to tapping into our uniqueness, skills and talents while learning and inspiring positive change in our society.

For a nation like KENYA to play in prestigious tournament like the Word Cup the football managements should switch their focus on the following;
Football for hope and development we should not give up as youth!
Posted by Wilsenx at 10:14 AM No comments: Links to this post

On the Move, Foot Prints.

My desire and passion is to connect, share and give back to the community, and influence positive change. Part of my dream has always been to establish a youth empowerment center that will create channels of opportunities, growth and trust amongst the young people growing them into responsible citizens.

After five months of intensive classes in Social Innovation Management (SIM 2013) at Amani Institute, I take this opportunity to thank the Amani team, my fellows from different countries, Nairobits team, personal mentors and my family for the cordial  support they gave me during my learning journey at Amani.

My project was born some twelve years back during the days of my football life, and to date I’m very happy for what it has grown to be; from changing the from Wilsenx, which is  a personal brand, to Wilsen Initiative (Wi) which is a team brand of change makers who aspire to influence positive change using their talents and skills.  Wilsen Initiative hosts creative integrated programs from football, motivational talks, co-creation of activities, volunteer- ship, leadership etc.

My appreciation goes to Amani Institute (http://amaniinstitute.org/) and the Do School (http://thedoschool.org) for being part of my journey of discovery in social innovation and social entrepreneurship.  I proudly acknowledge my new title of Social Innovator / Social Entrepreneur after five months of intensive training at Amani institute.

Even though the journey continues I greatly appreciate the much we have achieved since the idea came in place of Wilsen Initiative.

The Wi effect; INSPIRE, CREATE  & EDUCATE is our three  strongest pillars of success. 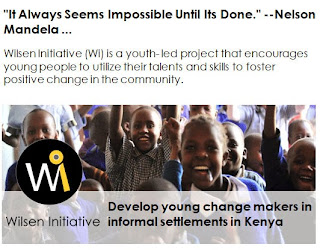 http://www.youtube.com/watch?v=s0wH9TLPVwE
Posted by Wilsenx at 9:29 AM No comments: Links to this post